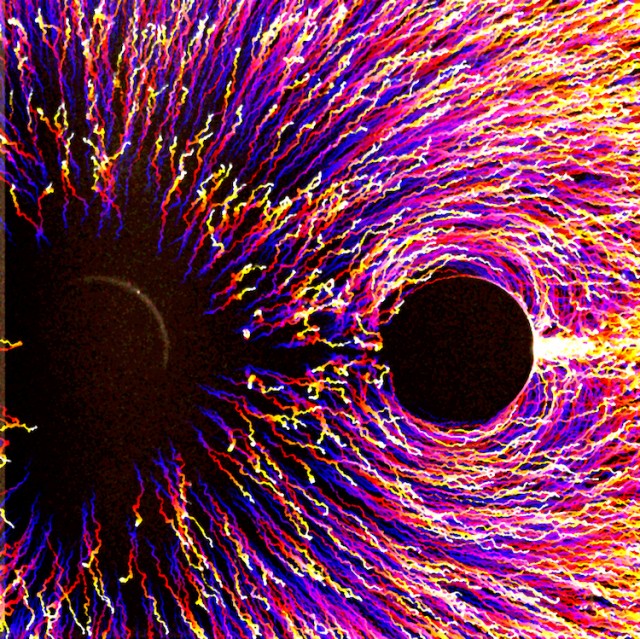 Poles Apart In this image, tiny particles, as found in sand, clay, and mud, migrate under the influence of a chemical potential gradient, moving away from a solute source that repels particles towards a sink that attracts them. The circle on the left is the particle repellent or the source, and the circle on the right is the sink. The particle trajectory over this 1000 second experiment is color coded with blue being the initial position and yellow being the final. The particle response to this solute force field is similar to the beautiful patterns formed by iron filings under a magnetic dipole.

ZOOMING IN Long range migration of small particles, called colloids, has been difficult to achieve due to the limitations posed by typical equilibrium colloidal interactions. We recently demonstrated a non-equilibrium interaction that enables colloidal migration over millimeter distances, giving us better control over the behavior of suspensions. These interactions are mediated by “chemical beacons” that establish solute gradients, or chemical potential gradients, that force particles to migrate via a process called diffusiophoresis. Imaged here is a beacon source that releases solute and repels particles (on the left) and sink that absorbs solute and attracts particles (on the right), giving rise to dipole interactions. The system starts with a uniform particle distribution, but as the source and sink start releasing and absorbing solute respectively, the particles start migrating away from the source and accumulating near the sink. Particle trajectories are color coded in time; blue is location at time=0, yellow is location at time=1000 sec., with the red/purple tails showing their movement from “blue” origin to “yellow” destination.