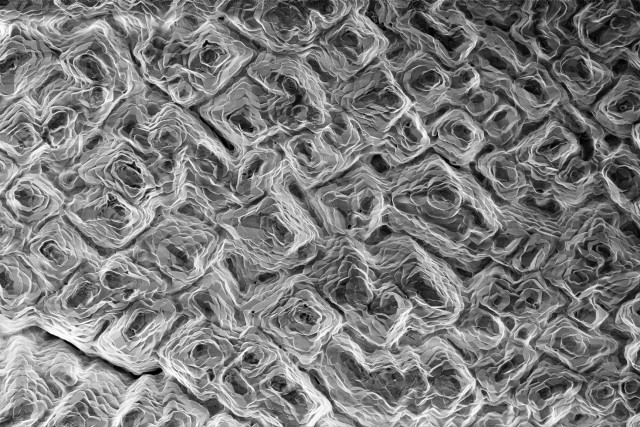 This image appears to be a topography map with intricate patterns charting enormous mountain ranges. However, instead of depicting towering peaks this photo captures microscopic grooves on the surface of a yttrium oxide sample. The scaly appearance is the result of the silicon hydroxide reacting with the surface of a yttrium oxide thermal barrier coating. Yttrium oxide serves as a thermal barrier coating used to protect components in jet engines.

This experiment tested the sample’s protective properties by exposing it to conditions similar to those found in engines outside of the laboratory. The sample was exposed to 50 hours in a flowing water vapor atmosphere at 1200°C. Silicon hydroxide, a reactive gas, was released as a byproduct between high-temperature water vapor and a component of the sample.

This image was taken using secondary electron scanning electron microscopy. The secondary electrons are very sensitive to surface textures, giving this image the appearance of a topology map. Using a very low accelerating voltage and electron beam currents when imaging allows for very high resolution of these sub micron features.