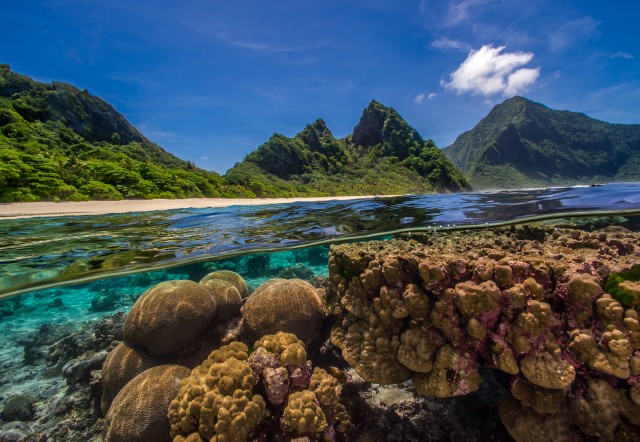 Hot and Steamy The corals of Ofu Island in American Samoa are peculiar. While most corals around the world are bleaching and often dying due to warmer ocean temperatures, the corals in Ofu seem plenty happy in water above 93°F. Scientists think these hot and steamy corals can provide hope for coral reefs facing a warming ocean. If their resistance to bleaching is an evolutionary characteristic, it may be replicable and allow to other corals around the world to flourish in the future.

ZOOMING IN I took this image while on assignment doing coral surveys with the National Park Service and Our World-Underwater Scholarship Socierty® on Ofu Island, Manua, American Samoa. Over/under images are always a challenge because you either have to keep your lens completely dry (the easier method) or completely wet. Since I took this in head high water, I had to continually dunk my camera lens, keeping it wet for several attempts until I got what I wanted. I used a Nikon D3S, Nikon 14mm/f2.8 prime lens, Aquatica housing, and Ikelite D161 strobes to capture this photo.