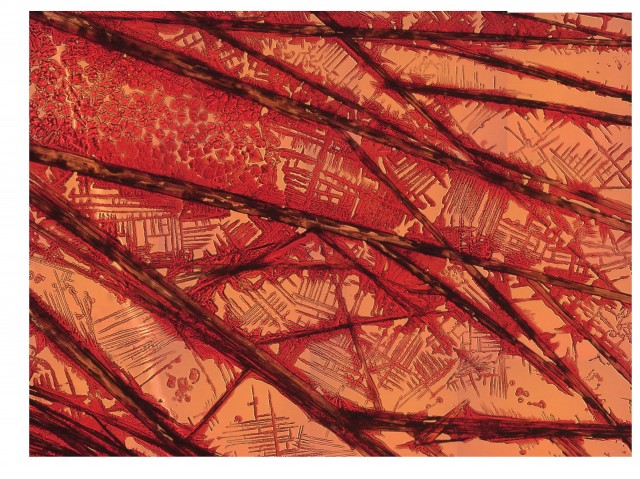 Though crystals are most often envisioned as shimmering stones, a slew of other forms exist.  While attempting to understand complex growth behavior of an energy-harvesting material, we grew a crystalline cityscape of micro-scale needles, pyramids, and beautifully arranged branched ribbons. The image shows a variety of crystalline forms adopted when a solution of lead, iodine, and organic molecules is dried on a glass substrate.  This image represents just a small subset of unique and beautiful structures found during our exploration.  The solvent evaporates slower than does water (roughly an hour for 30 uL of solution).  During this slow evaporation, we find that lead and iodine tend to crystallize first, forming the relatively large "needles" or "columns" seen in the image.  This leaves a relatively large concentration of organic material in the solution, which then joins with the remaining lead and iodine, forming quasi-2D layered crystalline "sheets" that take on a red appearance.