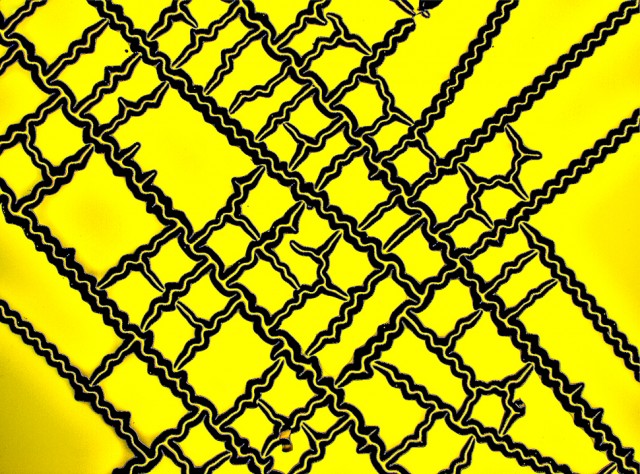 Semi-ordered paths of meandering thick lines encompass the image over a vibrant yellow. This image exhibits a bird-eye view of cracked film resembling a mountain range in the form of a labyrinth.

This image was the result of trying to design and fabricate some cutting edge photonic devices in the artist’s research. This image was produced through testing stability of stacks of thin films, which are up to a few hundred nanometers thick. The image exhibits the results of an unstable film after it was cooling off from being in temperatures from around 250-300 C. The outcome of this circumstance is the cracking of the film, which in this image looked like mountain ranges. These ranges mimic the randomness and serpentine figure of mountain ranges or cracks in the earth, both of which are the result of the movement of earth’s plates. A sinusoidal (sine) wave is actually name of that perfect wavy/curvy shape. That sort of a shape is actually one of the ways that nature expresses itself, especially at micro- or nano- scales.