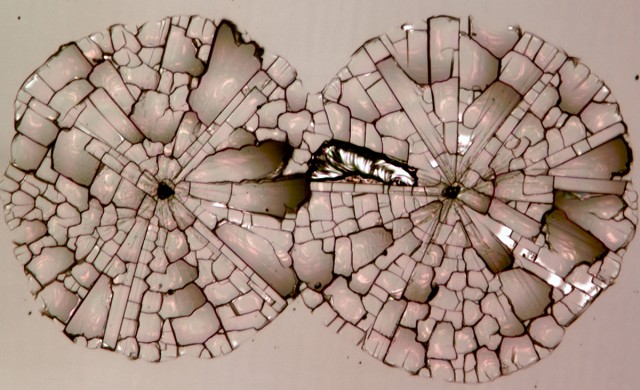 Two defects in a SiO2 glass thermally grown on a silicon wafer were irradiated in the center by a femtosecond laser. The ultra-high energy density of the laser caused vaporization of a small amount of Si. The Si impacted the glass, causing both defects to shatter and creating this beautiful display.

A 5-micrometer SiO2 glass film was thermally grown on a (001) Si wafer at 1200 degrees Celsius. A single, 150-femtosecond pulse from a chirped pulse amplified YAG laser was irradiated onto the center of two circular defects in the glass film. The laser ablated a small amount of the Si substrate (black pits in the center of each object). This ablated material was accelerated into the glass film at approximately 5 km/s, shattering the glass defects. Bright field optical micrograph. Image is approximately 500 micrometers wide.